That’s right, the title for today’s blog post is a quote. A quote from Damian Green, the First Secretary of State (de facto Deputy Prime Minister). Mr Green was commenting on the state of the NHS in his area (Ashford) today when he seemed to admit that the current state of the NHS is other areas was indeed worse than the [somewhat] ‘bad’ level of care in East Kent. Oh well, that’s a relief; some other poor buggers elsewhere in the UK have it worse off. I’ll just pack up my campaigning suitcase now then. Or I’ll write this blog post.

If the state of the NHS in other areas is worse than in East Kent then the NHS is dying. A close family member was taken to hospital in Margate by ambulance last Sunday. It was five hours from phone call to being seen by a doctor. In my day job, I hear anecdotal evidence like this all the time about QEQM in Margate and the William Harvey hospital in Ashford. During today’s Q&A in Ashford, which was organised by the Ashford Chronic Pain Group, Mr Green denied that the closure of key services at the Kent & Canterbury hospital was having any impact on waiting times at either Margate or Ashford claiming that fewer ‘big centres’ will provide better care. When asked if he supported the call for a new hospital to be built in Canterbury, he was quite clear: ‘no’. I’d like to be a fly on the wall next time Damian Green bumps into Helen Whatley, the MP for Faversham who has been very loud in her recent calls for a new super hospital (albeit not built in her constituency, but she seems keen to get involved in Labour MP Rosie Duffield’s campaigns nevertheless). I can’t imagine Whatley would enjoy being stuck on a long Conservative battle-bus outing between Green and Roger Gale, the MP for Thanet North, who also seems intent on denying people in Herne Bay (an area of his constituency he always seems keen to forget) quick access to a Canterbury based A&E.

I was delighted to be asked to chair the Q&A in Ashford today (offering a little political balance never did a Q&A any harm). It was mainly a chance for residents to ask questions of the former Secretary of State for Work and Pensions about PIP assessments, the state of hospitals in the area, help for carers and other issues that concerned this busy local group. Mr Green heard stories people from Kent being sent for PIP assessments in Barking; we heard about people being denied PIP because they had told an assessor that they tried to cook homemade meals instead of eating only ready meals; Mr Green heard of Ashford Job Centre refusing to allow disabled people access to their toilet facilities; he heard of the proposed Kent County Council cut to all funding for the Disability Information Service Kent (DISK) and of the fact that on Friday 28th July (yes, last week), there were only 4 ambulances available to cover Dover, Folkestone, Ashford and the Marshes. That’s right, 4! But don’t worry everyone, you can allay your fears after hearing all of that, because remember: “It’s not as bad here as it is in some places”. 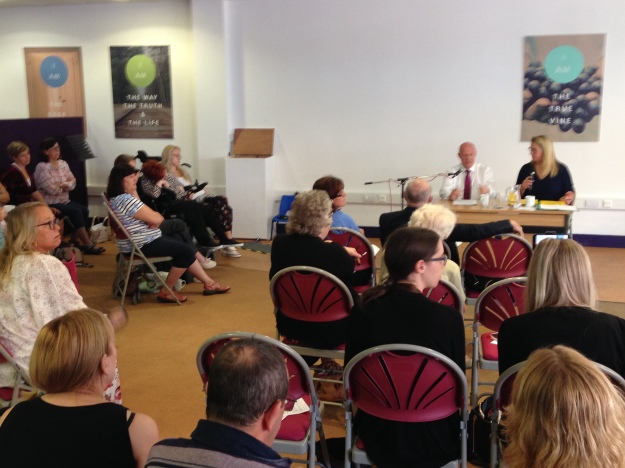 Asked about the staff who administer the PIP training, Mr Green confirmed that they were all fully trained. A quick google around job adverts for PIP assessors will show you that applicants have to be registered members of the Health and Care Professions Council (HCPC). This means any one of the following, with a little extra training from the DWP, can be a PIP assessor: You could be an arts therapist, chiropodist or podiatrist. You also could be a clinical scientist, a dietitian, a hearing aid dispenser, an occupational therapist, an orthoptist, a social worker or a speech and language therapists amongst other listed occupations. I am now just imagining my former-dietician-turned-PIP-assessor, asking the sort of questions needed to decide on whether to award PIP:

Nervous Disabled Applicant:    Yes well, I try to put good things into my body. It helps, you know, with the pain –

Dietician/PIP assessor:                I have to stop you there. You can’t have any government funding. Cooking health meals proves you just aren’t disabled enough.

Nervous Disabled Applicant:   This is horrible! These test centres are an abomination.

Dietician/PIP assessor:               It’s not as bad here as it is in some places. You could, after all, be in a chronically-underfunded NHS hospital.

That’s right Mr. Green. It’s not as bad here as it is in some places…