At midnight on 9th June, a thunderstorm was rolling over Canterbury in Kent. This is not a metaphor. There was a literal thunderstorm. Something was changing in the air.

Beneath the thunderstorm, under the roof of the Westgate Hall in the city, something was changing too; for the first time in 176 years, the constituency seat was about to be won by someone who wasn’t a Conservative. Rosie Duffield MP, ended Julian Brazier’s 30-year stint as the representative for Canterbury, winning for the Labour Party with a tight 187-seat majority. No battle buses have ever visited Canterbury; no big politicians ever mentioned the constituency; everyone in Westminster seemed to have forgotten Canterbury even existed. This wasn’t a drive from Labour central office to take a seat but something stirred in the local waters off Whitstable’s Estuary coast; the people were demanding a change.

So what happened in Canterbury, and in a night of ups-and-downs for all political parties, how did the Labour Party get it so right in this traditionally blue enclave of Kent?

Canterbury is a university town. There are three universities there: The University of Kent, Canterbury Christ Church University, and the University for the Creative Arts. The demographic has changed quickly over the past decade as the universities have expanded. Rumours on election night were that registrations of university students in the town were around 8000+. This was, in huge part, thanks to the amazing efforts of the Labour groups at those respective universities. Scores of young Labour members cheered and supported their friends and peers into registering. The mood in the Canterbury Labour Students’ camp was always ebullient; they knew something the rest of the town didn’t…yet. 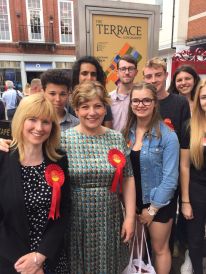 The Labour manifesto offered great promises for students. Many of whom, after the betrayal and then abandonment by the Liberal Democrats, took the sunny rays of promise where they could find it. It wasn’t just the promise to abolish tuition fees though, it was (as the BBC says) the fact that Labour offered ‘them some positive politics and a little passion’. The Conservatives clearly forgot that happiness sells.

There were two key towns in this constituency, Canterbury and Whitstable. A drive around either in the weeks leading up to the exam would have tricked any visitor into thinking this was a Labour stronghold. Teams of sign distributors took to the streets, even having competitions amongst themselves to see who could erect the biggest banner. All manner of houses (sometimes even including manors) had Labour signs outside. This was a constituency that put two fingers up to what people expected. If people wanted a sign, they got a sign. If you lived in a two-bedroom terrace you put a sign up, and if you lived in a ten-bedroom Georgian townhouse, you put a sign up. Being a Labour supporter in Canterbury is nothing to do with class and everything to do with passion and conviction.

The local Labour Party campaigners really took it upon themselves to dominate the internet. Their e-savvy candidate Rosie Duffied, was happy to be photographed everywhere and with everyone. She used social media to reach those who couldn’t make the rallies or the street stalls, individually messaging lots of people through social media who expressed confusion about Labour’s ideas on various media platforms. She took the time to speak to all of those with questions and doubts, both in real life and electronically.

Furthermore others in her campaign team ruled the internet. There was a snappy local website, a score of people on local Facebook groups quick to the button with Memes, quips, good humour and advice. There were YouTube videos of Spoken Word poetry, videos of Rosie up and down the constituency and pushes on Twitter and Snapchat too.

Yes, not everybody likes it. But you must admit there is something charming about knowing that your local party care enough to trudge around in the rain, knocking on your door and asking for your vote. If they are prepared to get bunions, they probably passionately believe in what they are ‘selling’.

The Canterbury and Whitstable Constituency Labour party split into ward teams, often with up to 10-15 members per team. There were daily targets of streets, identified as possibly sympathetic or interested in Labour’s agenda from the 2015 data. There was a systematic, well-manned campaign, run by an organised central team of incredibly capable and business-like local party members.

Labour looked the part on polling day. Everyone got the memo: ‘Smart with at least a smattering of red’. Labour representatives on polling stations wore jackets, fitted dresses, rosettes and sometimes (thanks June!) real red roses. They looked like winners, even if they never truly believed they would be.

Lots and lots of people volunteered to help out with the campaign even when they’d done nothing before. The turnouts at local Labour political meetings had been steadily rising for 10 years now and those numbers all translated to active feet and active minds when it came to campaigning season. This win began at least a decade ago.

That said, in Canterbury and Whitstable lots of new members and sometimes non-members joined in with specific tasks. Some mums formed a team to hand out flyers about proposed Tory spending cuts to education outside the school gates; some people were just delighted to be the honorary ‘Board Deliverer’ of the town, armed only with a van and a mallet. Some people were delighted to be the lucky bartender in town who got to pull a pint of ‘Red Rosie’ – a beer named after their candidate available in Whitstable. Everyone seemed to have a job. 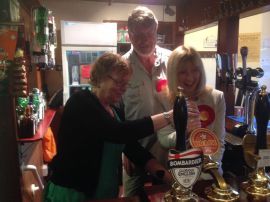 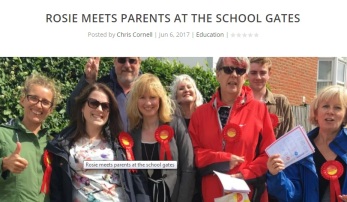 Last, but by no means least, Rosie Duffield was also an ideal candidate. Humble, kind and unassuming. She is instantly likable, a ready made best-friend to all, with none of the frostiness that Tory lady candidates (Teresa, Amber…) often show. Rosie was perfect combination of enough wisdom to have credibility and enough energy to campaign all the way to Westminster and beyond.

The Jez effect also had an effect on the result too of course. People want to embrace new radicalism; it has an energy about it and as the New Radicals put in their famous song, ‘You Get What You Give’. The problem with Teresa is that she has forgotten that people want to see and hear their candidates these days. You need to literally run and sing for your supper. Jeremy and Rosie have run a marathon. Willingly.

So that’s what happened in Canterbury. Perhaps the UK can learn a few lessons from this forgotten corner of East Kent. Perhaps the battle buses will be here next time? With a small majority of 187, Canterbury and Whitstable are going have to enjoy fighting, whenever the next time might be.

2 thoughts on “How did the Left get it so right in Canterbury?”